Look for other events 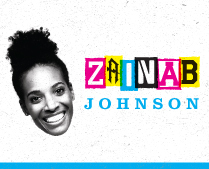 Zainab Johnson is a stand-up comedian, actor and writer from Harlem, NY who was recently hailed by Variety as being a Top 10 Comic To Watch. Zainab’s comedy is based on her unique point-of-view, which was shaped growing up as one of thirteen siblings in a Muslim family. Zainab can currently be seen playing the role of Aleesha on the Greg Daniels Amazon series UPLOAD and hosting Netflix’s 100 Humans, a social experiment where 100 individuals take part in interactive experiments exploring sex, happiness, torture and all the other aspects of being human. Zainab is a regular at the Comedy Cellar in NY as well as the Comedy Store and Improv in LA. She's made appearances on Late Night with Seth Meyers, HBO's All Def Comedy, MTV's Acting Out, and NBC's Last Comic Standing. She had a breakout performance at The Melbourne Comedy Festival and regularly returns to the Just For Laughs festival in Montreal.